Common Terns are widespread on Cape Cod, and in summer they typically settle in large nesting colonies on coastal islands and sand spits.  Due to concentrated large numbers, the nesting colonies tend to be noisy and chaotic.  After the chicks hatch and make first flight, the young remain dependent on parents for food for at least six weeks.  This hungry tern chick was recently observed among a large group of different terns on a sand spit at Black Beach in West Falmouth. 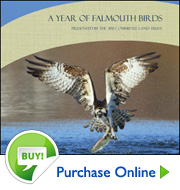